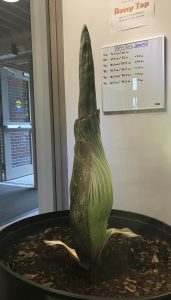 , commonly known as the corpse flower. This flower, native to Sumatra, produces the largest unbranched inflorescence of any plant species and attracts pollinators by releasing an odor similar to a rotting corpse. While blooming it also raises its temperature which also helps to attract pollinators.

You can see this flower in room 402 of Hesler.