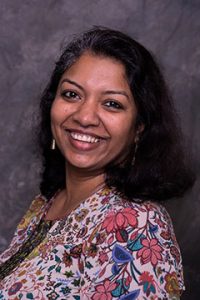 Cytokinesis is the final step in cell division, a complex process where a mother cell splits into two daughter cells, resulting in two copies of the original cell. This process occurs in all eukaryotic cells.

“What our lab discovered was that one of the signaling proteins, the key protein required for maintaining shape, also plays a role in the splitting of the cell during cytokinesis,” Das said. “With the help of other proteins from the same family, it makes sure that all the steps involved in the splitting process happen in an organized manner.”

Researchers will use fission yeast, Schizosaccharomyces pombe, as a model system to study the signaling patterns between proteins that organize those steps, aiming to understand how cytokinesis occurs.

“This has an impact in not just understanding how biology works, but also in the long term,” Das said. “You get the principle of how these things work and then you start applying it to more complex systems.”

The NSF CAREER award is given to early-career faculty on track to become tenured professors within their institution. The award will run through December 2024.