An interview with Josh Bembenek 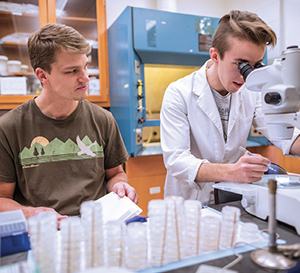 Josh Bembenek joined the faculty in August of 2012 after completing a bachelor’s degree at Texas A&M University, a doctorate at Southwestern Medical Center, and three postdoctoral fellowships. Among his several publications, the most recent is in Science—a collaboration with Eric Betzig, the recipient of the 2014 Nobel Prize in Chemistry. Last spring he received a prestigious five-year R01 grant award from the National Institutes of Health.

What motivated you to pursue career in science?

JB: My dad, a biochemist, had a great influence on me, and I became interested in science early on. I recall in elementary school being completely amazed by the discovery of how many feet of intestine were inside the human body. In ninth grade, a great science teacher explained how speakers work and how a CD is read by a laser, and I realized that I was fascinated about understanding how things work. I gravitated toward the life sciences.

I went to college at Texas A&M mainly because I was accepted and the tuition was reasonable. When I first started college I didn’t realize that one’s own motivation dictates one’s future more than the name of the college where the degree is earned. Texas A&M was a good place to learn this lesson because the opportunity to learn was there, but it was up to the student to figure it out. The large university environment didn’t provide for a lot of individualized attention. Despite my lack of confidence, I developed an independent approach that served me well. I had to pay for my education and consequently had a job while in college. I also worked in a laboratory doing research, but the time I could work there was limited by my other classes and my job outside of school. However, the time challenges notwithstanding, I realized that I really enjoyed the problem- solving associated with doing research in the laboratory. I knew that I wanted to go on to graduate school.

Once I started graduate school I remember feeling that the intellectual environment was exactly where my brain had belonged my whole life. While in graduate school I developed my own research problem that I have pursued independently ever since.

Can you describe the path that led you to your current research area?

JB: My area of research focus came about because I joined a cell cycle lab partly out of interest and partly out of necessity. While working on my thesis, it became clear that the protein I had been characterizing primarily using hard-core in

vitro biochemical assays was regulated in the cell by spatial restrictions. I began using microscopy to investigate how the cell regulated this pathway and became completely engaged in cell biology and imaging. I literally chose a postdoc position based on looking at the most recent high profile papers and trying to decide which organism lent itself to the most impressive images, which narrowed me down to the Drosophila oocyte or C. elegans. Given that C. elegans had a robust community of investigators looking at cell division pathways, I ended up interviewing in labs using this model system. When I went to John White’s lab at UW Madison, I knew where I wanted to be. This was a lab which was a normal biology lab filled with students and a second microscopy lab filled with computer scientists, engineers and advanced imaging equipment like a multiphoton—an environment in which I could thrive.

“My advice to any postdocs looking for jobs is to be persistent. It took me four job searches to find what I wanted. Most people probably give up before then. What discriminates me from others isn’t necessarily the smarts or how good I am, but the fact that I am persistent and tenacious.”

Any advice you would offer to undergraduate and graduate students?

JB: My first piece of advice to undergraduate students is to be proactive. This is especially true if they have the opportunity to work in a laboratory. In class you are told what you need to know and there is a clear path to knowing it: study and memory. In the lab, no one can tell you what you need to know, success requires innovation, creativity and hard work. These same skills apply to both finding a lab to work in and a project to work on, as well as the day to day work of participating in research.

If I were to offer advice to graduate students it would be to be flexible. You can learn how to do science anywhere, so the primary consideration would be that you feel there are promising prospects in the lab you choose and that you fit into the environment well. Obviously, it is important to have some interest in the research, but unless you are already committed to a specific field, your interests are likely to change as you mature as a scientist. And this is one of the most rewarding parts of science: you can never predict exactly what answers you will find in the lab and often your career path can have unexpected turns despite

the most well-laid plans, which can end up being better than you would have imagined. My advice to any postdocs looking for jobs is to be persistent. It took me four job searches to find what I wanted. Most people probably give up before then. What discriminates me from others isn’t necessarily the smarts or how good I am, but the fact that I am persistent and tenacious.

What do you like most about your job at UT?

JB: I most like offering what I’ve learned to students in the lab and the classroom. After working in science for many years I am comfortable knowing how to approach new questions and performing experiments in the lab. Helping students understand the exciting aspects of science and helping them achieve their own goals is more rewarding than continuing to do it myself and hopefully

will inspire the next generation of scientists and biomedical related professionals.

What are the biggest challenges?

JB: The hardest part is the transition from being a postdoc to a Project Investigator (PI). As a post doc I knew how to do experiments really well, but my training had not prepared me to be a PI running a lab. While we all know in general that running a lab is different than running the experiments, there are many skills that are quite different for success in the two, so learning new skills for the new job is essential and not easy after many years being primarily focused on getting experiments to work.