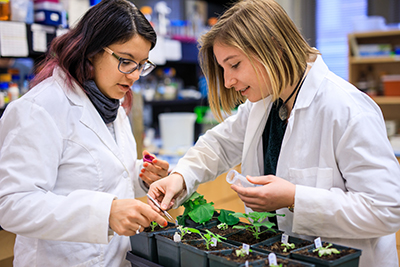 Like many undergraduate students, Jessica Fernandez had no idea about the variety of career paths available for someone with a PhD in biology. She expected to go into nursing, but changed her mind when she took a microbiology class.

“The professor was so engaging and excited about microbiology that I scheduled a meeting with them to discuss potential career options in microbiology,” says Fernandez, who continued taking biology classes when she transferred to California State University in Los Angeles. While there, she joined a research team that collaborated with the Jet Propulsion Lab characterizing microbes isolated from space crafts and clean rooms.

Fernandez joined the PhD program in biochemistry and cellular and molecular biology at UT in fall 2014. Her decision to come to UT was in large part due to the wide variety of research projects to choose from within the department. She was admitted as a scholar in the NIH-funded Program for Excellence and Equity in Research (PEER). After rotating in several labs, Fernandez joined the Burch-Smith lab where she studies the role of cell-to-cell communication in plants through pore-like structures called plasmodesmata.

“These structures have diverse roles, including being involved in pathogen responses,” Fernandez says. “My project focuses specifically on the roles of secondary metabolites produced by plants in regulating intercellular trafficking through the plasmodesmata.”

In 2019, she was awarded an F31 Ruth L. Kirschstein Individual National Research Service Award from the National Institutes of Health to support her research.

“Writing my own grant was a real eye opener on organizing what I need to complete experimentally,” Fernandez says. “It truly allowed me to focus and keep my eye on the prize. Since submitting the very first proposal, which was rejected, I was able to think of the project clearer. The resubmission was definitely an easier process and the proposal was much stronger.”

In 2020, she won the Dr. Ray Holton Plant Sciences Award and Dissertation Improvement Award for her research. She currently has 10 publications. Research, however, is not always an easy or linear path. There are often obstacles that must be worked through.

“One of my most memorable moments was trying to get a northern blot to work for a paper we were re-submitting,” Fernandez says. “The protocol was about 13 hours long and I couldn’t get the image. Turns out, a buffer was bad. Finally, at around 11 p.m. on the night before the paper was due, I got the image. I called my advisor and we both screamed with joy! The next morning we got the figure and submitted the paper.”

Fernandez appreciates the collaborative and supportive environment in BCMB and looks for the same in any post-doctoral program she enters. She also has support at home that helps as she balances work and personal time, which is difficult at any career stage.

“I always feel like I never give either research or my family the time they deserve. I don’t have any given times that I try to meet, but if the week is light for work, I’ll try and spend more time at home,” Fernandez says. “I have a very supportive husband though, so I never have to really worry about dinner or taking charge of night routines for our child if I’m running late.”

In the small amount of spare time outside of lab and family, Fernandez likes to garden.

“The past two summers we’ve grown all kinds of vegetables,” she says. “It’s very meditative to go out and look at the fruits of my labors.”