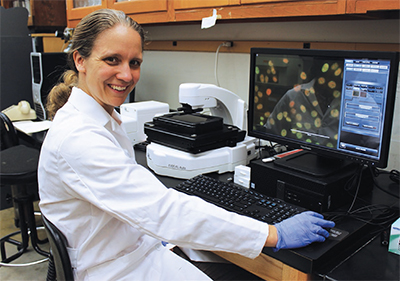 Rachel McCord’s interest in science is in her genes. She learned how to be curious about the natural world and how it works from her parents, who were both scientists.

“I always loved puzzles and solving problems,” says Rachel, a new assistant professor in the department. “Some of my favorite TV shows growing up were math and science PBS shows like “Newton’s Apple” and “Square One.” I loved other classes like literature, history, and music, but during my time at Davidson College it became clear that I wanted science to be my main focus while continuing other interests in the background.”

The problem Rachel faced, however, was what kind of science she wanted to pursue. When explaining this dilemma to her advisor, he opened her eyes to the field of biophysics. With this revelation, Rachel designed her own major in biophysics through the Center for Interdisciplinary Studies at Davidson and work with both biology and physics advisors.

“I had the opportunity to build optical tweezers and use them to trap swimming single celled algae called Chlamydomonas,” Rachel says. “This amazing independent research experience as an undergraduate has continued to influence my desire to involve undergraduates in meaningful research. It also showed me how asking one question in biology can lead to another and another seemingly endlessly, which convinced me that I wanted to keep pursuing this kind of science research in graduate school.”

Rachel went on to earn a PhD in biophysics from Harvard University and was a postdoc in systems biology at the University of Massachusetts before joining the BCMB faculty. In her lab, Rachel has continued her research in 3-D genomic structures.

“We start by considering the basic problem that the six-foot long human DNA sequence must fold into a microscopic space, and this compact folding must still allow it to do its basic functions of regulating genes at the right time, replicating itself before cell division, and repairing itself after damage,” Rachel says. “We are then investigating how this 3-D genome folding is affected by stress on the nucleus caused by X-ray irradiation, or when the nucleus has to squeeze through tight spaces.”

Rachel involves both undergraduate and graduate students in her research and hopes to provide them with confidence in interpreting, critiquing, and using the vast array of new tools available.

“There are so many analysis tools available now that it is more important that students learn how to ask the right questions than it is for them to know how to write a computer program,” Rachel says. “Now that there is such a flood of biological data coming from these kinds of techniques, I also want the students to learn to think critically about how to interpret these data, and what kinds of pitfalls you can run into during research.”

Rachel is excited about returning to Knoxville and the UT community where her parents began her quest for scientific discovery many years ago.

“I love the diversity of research going on at UT,” Rachel says. “Even within BCMB, I have learned so much about fascinating areas of biology outside my own focus.”