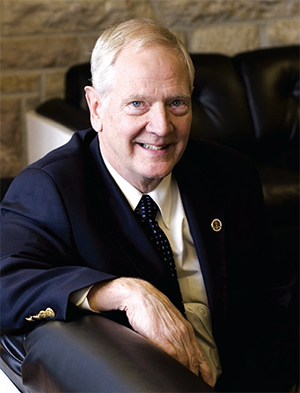 In 2011, a group of the original biochemistry departmental alumni returned to UT for a reunion to revisit and celebrate their careers, and to share in BCMB’s success that would not have been possible without their early efforts. Among these alumni was Bill Albritton, a distinguished PhD graduate of the program (’68). Bill received his undergraduate education at the University of Alabama, and first became familiar with the Knoxville area and university through a summer program offered by the Oak Ridge National Laboratory. There he decided to attend graduate school at UT in the nascent Department of Biochemistry and carry out his dissertation research under the guidance of one of the founding biochemistry faculty, Al Levin.

After obtaining his PhD from UT in 1968, Bill went on to earn an MD from the Medical College of Alabama in 1970 on an American Cancer Society fellowship. Following a pediatric residency at Stanford and two years with the CDC in Atlanta, he immigrated to Canada in 1975, where he joined the faculty of the University of Manitoba in Winnipeg. He has had a distinguished career in public and private medicine in Canada and the United States and served as the dean of the College of Medicine at the University of Saskatchewan before his retirement last year.

While attending the 2011 reunion, the attendees came up with a creative idea to “give back” to the department that they pioneered.

“We had a reunion that Ken Monty set up back in 2011, and when we were talking about it, we thought maybe if we created the fund we would allow people to donate to it in the name of anybody that they wanted to – it wouldn’t be just Al Levin’s students or colleagues, it could be open to the entire department,” Bill says.

The result was the creation of the Biochemistry Alumni Graduate Assistant Award Endowment. Through their generous gift, the department recognizes one outstanding PhD student based on excellence in both teaching and research scholarship with the Biochemistry Alumni Graduate Assistant Award and $1,000. (Note, last year’s winner Jessica Gullet is featured in this year’s newsletter).

Ken Monty provided oversight of this endowment in the name of the early biochemistry alumni until his untimely passing in 2016. Bill, who is a strong supporter of this fund, has graciously agreed to take up the mantle where Ken left off and will spearhead the effort to engage alumni and others to continue to raise support for this critical effort to attract and retain deserving graduate students.

“For me it was a way of acknowledging my mentor Al Levin. You kind of think when you first graduate that you don’t have to thank people for what they did for you,” Bill says. “It was a way for me to say thank you. When it was first created, the department did not have an undergraduate program; it was only a graduate department. I think focusing on graduate student support was a logical outcome of what we were trying to do with the fund.”

As he looks back on his career and time at UT, he has one piece of advice for current graduate students.

“Find your passion in life – hopefully it’s in science – and pursue that passion,” Bill says. “Keep that sense of inquiry; that sense of yearning to discover.”If you are interested in donating to the Biochemistry Alumni Graduate Assistant Award Endowment, please contact Don Eisenberg at 865-770-1913 or email at BCMBalumni@utk.edu.