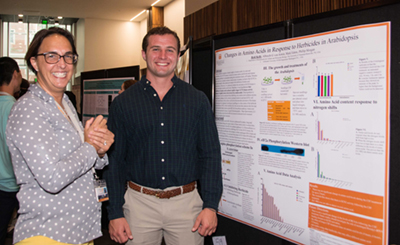 This summer, the department hosted an NSF-funded Research Experience for Undergraduates (REU) event organized around the broad question: “How do cells and organisms perceive their environment and make life or death decisions?” This program was tailored to deaf/hard-of-hearing (D/HH) students, a population drastically underrepresented in STEM careers nationally. For 10 weeks, nine D/HH students, along with two hearing students interested in training in both scientific research as well as American Sign Language (ASL), gained hands-on research experience in modern molecular and cellular biology, with an emphasis on emerging technologies as well as professional training and mentoring. Several of the REU students were from colleges and universities that specialize in deaf education like Galludet University and the National Technical Institute of the Deaf at the Rochester Institute of Technology, as well as from other universities and colleges throughout the nation. Dan Roberts, BCMB professor and Principal Investigator, and David Smith, UT Center on Deafness and co-PI, led the REU program. Amie Sankoh, a deaf BCMB graduate student, served as the program’s teaching assistant. Tessa Burch-Smith, BCMB associate professor, served as one of the program coordinators. 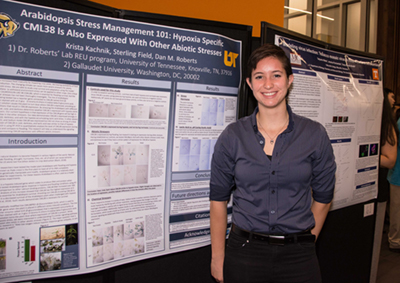 The students worked in eight BCMB labs, one microbiology lab, and one lab at the UT Institute of Agriculture. Alexandre, Binder, Burch-Smith, Das, Krishnan, Lebeis (microbiology), McCord, Olokulu (entomology and plant pathology), Roberts, and von Arnim served as host labs. They performed interdisciplinary research utilizing state-of-the-art molecular, genetic, genomic, and systems biology/bioinformatics techniques to investigate the mechanisms and strategies employed by various model organisms across biological kingdoms to sense and adapt to a changing environment. The students also participated in numerous professional training workshops that included mentoring in scientific communication, training and practice in poster and stand up presentations, and workshops on postgraduate career opportunities. Professor Adebowale Ogunjirin of the Department of Science, Technology, and Mathematics at Gallaudet University led a special career workshop. He shared his fascinating journey and challenges faced in navigating careers in industry and academia in Nigeria and later the US as a deaf scientist. A highlight of the REU was an open house that brought D/HH high school students from the wider Tennessee community to campus to interact with the REU students, including a visit to REU labs to learn about research opportunities. At the end of the program, REU students presented their research findings at a campus-wide poster session hosted by the UT Office of Undergraduate Research and at a one-day symposium sponsored by the BCMB department.

NSF support for the BCMB REU site will continue for at least the next two years. We look forward to hosting more D/HH students or those interested in being ASL interpreters in our program. Read more about the program online.