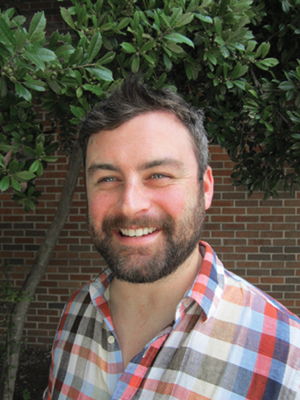 Nathan Brady is a fifth-year graduate student in the lab of Professor Barry Bruce. He is a recipient of an Outstanding Speaker award at the Fourth SMALP Conference in 2019. Nate’s talk at the conference focused on his research examining and optimizing the integration of Photosystem I into biohybrid solar devices for the sustainable production of electricity.

Arguably, the most urgent problem facing life on Earth today is global climate change, arising from the destructive way in which we fuel our society. Nate’s work focuses on developing a new way to produce electricity from sunlight by integrating photosynthetic proteins into solar energy harvesting devices. This applied photosynthesis approach leverages a truly renewable strategy, refined over billions of years of evolution, to produce energy.

“It’s not only our responsibility to mitigate the damage we have dealt to our planet; it’s also the only plan that ensures the longevity of our species on it,” Nate said.

Nate has been interested in environmental problems for more than 10 years. As an undergraduate chemistry major at the State University of New York (SUNY), Nate chose to focus on environmental chemistry. In his senior year, he was engaged in not one but two research projects. He analyzed the fatty acid profiles of coral reefs off the coast of Florida as a metric for overall ecosystem health, plus he measured the nutrient requirements of anaerobic digesters that can help us to produce methane rich biogas from food waste. After college, he took a job at Life Science Laboratories in Syracuse studying contaminant and nutrient cycling in the environment. This experience gave him first-hand insight into the effort required to manage environmental compliance. Nate became aware of the glacial pace at which toxicity limits are set and communicated and the importance that our understanding of environmental toxicity plays in setting these regulations. Soon he heard about Quicksilver Scientific, a start-up business that assesses the prevalence of trace metals in humans and the environment.

Interested in the job, he emailed or called Chris Shade, Quicksilver’s CEO and founder, every three weeks for the following six months, moved to Colorado and delivered sandwiches for another three months, maxing out his credit card. Finally, his persistence paid off and he got the job. Quicksilver was built around a high-performance liquid chromatography system, capable of simultaneously detecting various species of mercury in any environmental matrix to the part-per-trillion level. The five and a half years he spent growing alongside this burgeoning business turned him into a scientist. It also showed him how difficult it is to perform environmental work in our current political climate, work we so desperately need in our world today. Nate thinks this will not change until we address the stranglehold the fossil fuel industry has on our environmental policy and the larger regulatory landscape of our global society.

While considering going to graduate school, Nate stumbled across a TEDx video, filmed on a shaky cell phone, of Professor Barry Bruce and his work in applied photosynthesis. Nate’s target was set. He had never heard of the technology before, but it checked all the boxes for him. From there on, he only applied to PhD programs that had researchers focused on this technology, with Barry and UT being his number one choice. Of the dozen researchers he was able to find at the time, the vast majority were focused on wiring the photosynthetic proteins into devices, working in chemical engineering or materials science. What intrigued him most about Bruce was the biological prospective on Applied Photosynthesis technology. The Bruce lab was focusing on understanding how photosynthetic proteins function in vivo, which may allow us to preserve their activity in vitro.

Regarding his late career switch from chemistry to biology, he quotes Andreas Nebenführ: “The biggest questions we have left are in biology; they aren’t adding elements to the periodic table anymore.” While some folks at Oak Ridge National Lab may disagree with that last bit, Nate believes that biology is the stage upon which we observe chemistry and physics manifest.

“To this end, our knowledge of the natural world is becoming so comprehensive that the classical divisions between fields are becoming increasingly obscured,” Nate said. “I believe that if you want to really solve a problem today, you need to be a student of many disciplines.”

“We have experts in techniques as varied as mutant screens and yeast two-hybrid assays to X-ray crystallography and nuclear magnetic resonance, studying biological processes in diverse model organisms,” Nate said. “In my opinion, BCMB is both diverse and cohesive, providing a place ready-made for collaboration, exploration and ultimately success in research.”

Being a graduate student is not all about experiments and going to classes. Going to conferences, presenting research and talking to experts is a big part of the learning experience. One of the most memorable moments during Nate’s time at UT was his trip to the International Congress on Photosynthesis Research in Maastricht, the Netherlands.

“I went to this conference early in my first year at UT and the overwhelming knowledge there was equal parts humbling and enthralling,” Nate said. “This relatively small group of international researchers were housed in a secluded farmhouse in the Southern Dutch countryside for a week. This experience afforded me the opportunity to engage deeply with scientists whose prowess and intellect, I would find in following years both influential and intimidating. Looking back, I’m happy I was so naive at the time, as everyone was so approachable!”

When he is not in the lab, Nate loves to be outside hiking, backpacking, kayaking, rock climbing, mountain biking, or skiing.

“Admittedly, my skis don’t get much use here, they mostly sit leaned up against my bedroom wall, taunting me,” Nate said. “Over the last year, I’ve also enjoyed researching and designing an off-grid tiny house that I intend to build. I plan to build this house on a 30-foot long trailer at 8.5 feet wide and 13 feet tall. The primary power for this house will be provided via a photovoltaic array on the roof, the stove will be fueled using an anaerobic digester to produce methane gas and water will be collected and reused on site. This time at UT has given me the ability and inspiration to move on from earlier chapter living fully within my research interests.”