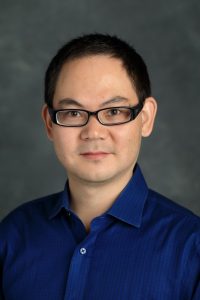 Jianbin Wang went to graduate school at Zheijiang University in China at a time when the first human draft genome was released. Research on genomics and bioinformatics was booming.

“I was riding the genomic wave and sequenced a few genomes from bacteria and viruses” said Wang, an assistant professor in BCMB.

“I am continuing and expanding this research, including using genetics and cell biology approaches to carry out research in other multicellular organisms with DNA elimination, such as free-living nematodes and copepods,” Wang said. “Little is known on the molecular mechanisms of metazoa DNA elimination. My lab is currently working on the molecular mechanisms of DNA elimination in several species, including the parasitic nematodes Ascaris (pig and human) and Parascaris (horse), free-living nematode Oscheius tipulae, and freshwater copepod Mesocyclops edax. The unique features from these systems enable us to carry out comparative and complementary studies of DNA elimination in metazoa.”

Students in his lab use both computer and wet lab methods including molecular biology, genomics, bioinformatics, genetics, and cell biology.

The National Institutes of Health (NIH) agree that this is important research and recently they awarded Wang a five-year grant to continue his research.

Wang joined BCMB in February 2020 and teaches BCMB 240: Genetics and BMCB 608: Journal Club in Genetics and Developmental Biology. His first year of teaching was via Zoom due to the pandemic. He looks forward to the in-person class in this fall semester. When not working, he enjoys travel and photography.