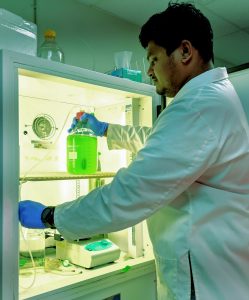 Jyotirmoy Mondal became interested in mathematics and biology because of his mother.

“From a very early age my mother inspired me with these subjects. She studied biology in her undergraduate degree, and I was tutored by her until high school. I remember having a magnifying glass as a kid which I would take around and look at things from sand grains to the veins of leaves. Maybe, that motivated me to get excited about microbiology?”

He became passionate about microbes while earning his bachelor’s degree when he did his first independent research studying multi-drug resistant bacteria with a microbiologist at the Institute of Genetic Engineering in Kolkata, India.

Mondal heard about BCMB and UT when he met Barry Bruce, a professor in BCMB, who gave a seminar in India. In fall 2015, Mondal joined the PhD program in BCMB and after rotating in several labs, joined the Bruce lab which studies both basic and applied photosynthesis. He is currently finishing his doctorate studying photosystem I from thermophilic cyanobacteria. These are photosynthetic bacteria that survive in high temperatures.

“I have always been fascinated by the world of microbes and how omnipresent they are with unfathomable capabilities,” Mondal said. “I am particularly interested in extremophiles, which I think are the most interesting organisms on the planet because they can survive in extreme corners of our planet.”

One of his most memorable doctorate research experiences was learning crystallography of the photosystem complexes at the facilities in European XFEL (Germany), SACLA (Japan), and PAL-XFEL (South Korea). 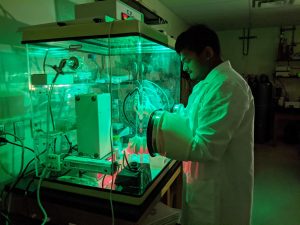 “As a trained microbiologist, crystallography was a completely novel technique that I was introduced to,” he said. “The most challenging part of this was making crystals of the photosystem I-ferredoxin complex because it required complete darkness for the entire process and could only be done with night-vision goggles. We would stay in the darkroom for six to seven hours at a stretch and use the night vision goggles for making these crystals. We were able to successfully make these crystals and perform pump-probe serial femtosecond X-ray crystallography on them.”

In addition to carrying out research, Mondal has mentored many undergraduates.

“The most exciting thing about my research was mentoring my army of undergraduate researchers, which taught me to do science better,” Mondal said. “They have been the highlight of my research experience and have helped me tremendously in my research. Four of them are currently in graduate programs in the USA.”

As an international student, Mondal finds BCMB to be a second family with support from the office staff and faculty, especially his mentor Professor Bruce.

“I have been fortunate to have a safe and supportive environment to conduct my research,” said Mondal, who, when not doing science, can be found cooking or gardening. “I always thought if science didn’t work for me that I would pursue cooking as a career. For now, I love cooking as a passion. I also love gardening because it is therapeutic and a stress reducer.”