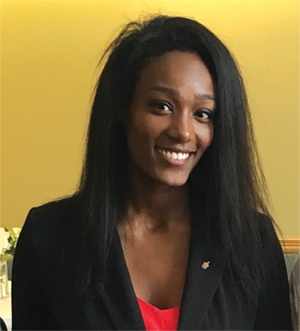 During the winter break of her sophomore year Rena Abdurehman received an email saying that she could earn money by participating in a Federal Work Study program and work part-time in a BCMB lab. The timing was very fortunate because Rena wanted to take part in an undergraduate research project, but did not know where to start. During her first semester in Barry Bruce’s lab, she learned general lab tasks, various lab techniques, and common protocols. Towards the end of the semester, Bruce recommended her to the Educational Advancement Program at the UT Summer Research Institute. As part of that program, Rena conducted research under Bruce’s supervision studying how proteins move from cytosol into chloroplasts.

The vast majority of chloroplast proteins are encoded by nuclear genes and proteins have to be imported into the chloroplast through membrane-localized translocons. This process is mediated via N-terminal extension of chloroplast proteins know as transit peptide and, despite discovery more than 40 years ago, the transit peptide function is still poorly understood. Transforming onion epidermal cells and pea protoplast, Rena explored whether particular mutations in the transit peptide will alter ability of proteins to more inside chloroplasts. At the end of the program, all students traveled to Atlanta, Georgia, to participate in the SAEOPP National McNair Conference where Rena won third place for her poster presentation. She also presented her research at Posters at the Capitol, the Women in STEM Research Symposium, EURēca Symposium, and the 26th and 27th Western Photosynthesis conferences. Rena was awarded second place for Outstanding Poster Presentation at the 26th Western Photosynthesis Conference and won an Arts & Sciences Award at the 2018 EURēCA Symposium.

During summer 2017, Rena received a competitive UT-funded exploration grant to conduct research in Rosario, Argentina. She met and collaborated with Eduardo Ceccarelli, who studies enzyme function in the bacterium Leptosira interrogans. During the summer trip, Rena learned about the prevalence of Leptospirosis, a disease caused by this bacterium, which is classified as the world’s leading cause of hemorrhagic disease. Its prevention and remedy in humans is difficult because of the similarity of its symptoms to those of other diseases. The disease is easily transmitted from animals to humans. Runoff from ranches, feedlots, and slaughterhouses enables the bacterium to enter rivers that flow along the coast of Argentina. Traditionally, water cleanup is performed through wastewater treatment plants, but those processes are costly and can be overwhelmed in periods of high rainfall. Rena has proposed a novel low cost water treatment method using the aquatic plant duckweed to help alleviate the spread of the disease. Duckweed can effectively filter numerous contaminants, such as bacteria, nitrogen, phosphates, and other nutrients, from water. Maybe it also will be able to filter Leptosira interrogans? Last spring Rena was awarded a United States Fulbright Research Award to return to Argentina for nine months. Adding different duckweed strains to the water, she will be testing the viability of Leptosira interrogans. She will also investigate efficient ways to add duckweed into wastewater treatment plants across the country.