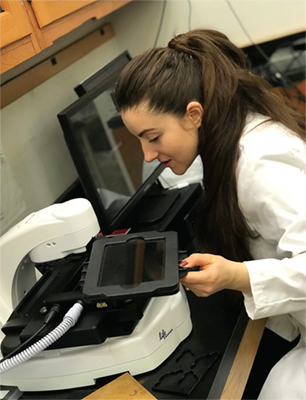 How many of you can say that you skipped first grade, not because you were too talented, but because you were trying to avoid getting killed on the way to school? Rosela Golloshi found herself in that situation as a child, and the only means of getting an education was listening to school lessons on the TV. Rosela grew up in Patos, a small town in Albania, during the Albanian civil war. While it was scary, this experience also taught her she could survive anything and there was a path to a better world by hopping on a helicopter (ubiquitous during the war) or a plane. So, when the time came for college education, Rosela boarded that plane to the United States to attend the University of North Georgia in a small town called Dahlonega. It was not exactly a well-known place, but she had family support in that area.

At first, Rosela’s intention was to become a medical doctor, but after many hours of shadowing, she felt dissatisfied with the lack of time and resources doctors have to research and seek meaningful explanations for the many unknowns they encounter. Having understood the importance and excitement of biological research as a senior, Rosela joined a research lab where she assisted with behavioral studies to understand the effects of methamphetamine exposure in mice, worked in a clinical pathology research lab, and participated in protein engineering research. Upon graduation, Rosela worked for a year and a half at a pharmacogenomics lab at Aeon Global Health. Her team analyzed the impact of patient genetics on drug metabolism to reduce adverse effects, but she soon realized she wanted a deeper understanding of the human genome and mechanisms affecting essential regulatory processes, which motivated her to begin her doctoral studies in BCMB at UT in 2015.

After rotations, Rosela joined the lab of Rachel Patton McCord where she has developed an intimate knowledge of cancer cell nuclei as she investigates the role of 3D genome structure in cancer metastasis. Recent cutting-edge techniques have identified a nonrandom organization of the chromosomes inside of the nucleus that is crucial for gene regulation, replication, and repair of DNA damage. While the morphology of the nucleus has been used for decades to determine the malignancy of cancer, little is known about how the nonrandom organization of the chromosomes inside the nucleus is affected when cancer cells must squeeze themselves through tight spaces to metastasize from primary tumor to distant sites. Rosela’s research has the potential to provide a new understanding of genome organization and its role in cancer metastasis that could aid in preventing this deadly phase of the disease. As a third-year student, Rosela has already contributed to three publications that are published or are submitted.

“The graduate school experience has been essential in shaping my critical thinking skills and I realize that there is no limit to creativity in research,” Rosela says. “After completing my degree, I would like to provide a platform for science and research education in countries where such opportunities are limited.”