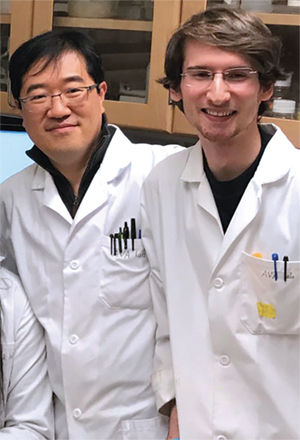 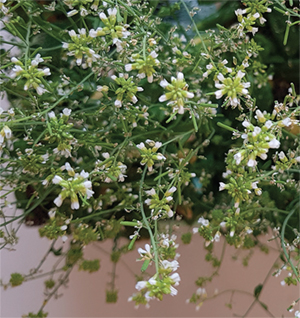 A voracious reader growing up, Charles Barnes came across many books related to environmental problems, which led him to consider a career in environmental science. His first encounter with research was in the field studying bluebirds. As he progressed through courses at UT, however, enjoying the challenge and content of organic chemistry (crazy, right?) and genetics, he realized molecular biology was a better fit for him. In order to gain research experience, Barnes joined the von Arnim lab where he studied plant responses to nutritional stress.

Arabidopsis thaliana is a weed, but one of the easiest plants to study. Barnes used this model organism to investigate whether biosynthesis of proteins changes in response to varying levels of one of the most important plant nutrients – nitrogen. Plants require more nitrogen than any other nutrient, but its availability is limited in the soil, which is the main reason for fertilizers. Nitrogen is essential for biosynthesis of amino acids, the building blocks of proteins. One would expect that without enough nitrogen, the biosynthesis of proteins would change. In fact, he and his mentor, postdoctoral researcher Sung Ki Cho, confirmed that protein synthesis is repressed when nitrogen is limited. How does this happen? Protein synthesis is typically repressed by a specific phosphorylation event in the translation initiation apparatus. Barnes tested whether this modification would take place when nitrogen is withdrawn from the plant growth medium. Contrary to his initial hypothesis, Barnes observed that limiting nitrogen or boosting nitrogen availability had exactly the opposite effect from what was expected. The back and forth of various working hypotheses during the project was one of the most challenging experiences for Barnes.

“It was a great project for my slightly younger undergraduate self,” Barnes says. “My presence was not dependent on funding and I could get the gears whirring in my head. I had a very unique time as an undergraduate researcher in BCMB.”

Last spring at the Exhibition of Undergraduate Research and Creative Achievement at UT, Barnes received awards for his research poster – the Office of Research & Engagement Bronze Award and an Arts & Sciences Award.