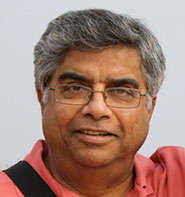 Research of my laboratory focuses on the molecular and genetic basis of insecticide resistance. We use Drosophila melanogaster as a model insect to understand how insects become resistant to insecticides. Specifically, we study transcriptional regulation of cytochrome P450 (Cyp) genes which code for a family of enzymes involved in detoxification of xenobiotic (foreign) compounds including DDT and other insecticides. In resistant strains of Drosophila, multiple Cyp genes which map close to the resistance loci show significantly higher level of expression compared to the susceptible strains. However, it is not known whether only one or multiple Cyp genes are involved in DDT metabolism. The mechanism of over-transcription of these genes is also not known. My lab is working on these two problems. We also study induction of Cyp genes by various xenobiotics. We found caffeine, the most heavily consumed xenobiotic induces several Cyp genes including the ones showing resistance-associated over-transcription. We use various molecular biology and genetic techniques, cloning, sequencing, transgenic technology and microarray to study the resistance mechanism, metabolic functions of selected P450 enzymes, Cyp gene regulation and the mechanism of Cyp gene induction by caffeine.