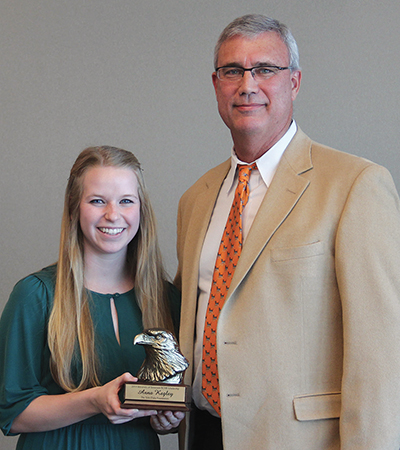 In 2010 the Department began sponsoring a scholarship for an outstanding undergraduate. The scholarship is in memory of Tyler Duke, a talented BCMB major who died unexpectedly at the end of 2009, in the middle of his senior year at UT. He had already been accepted to attend pharmacy school after graduating. The scholarship was established by his family in the amount of $1000 initially, but was recently increased to $2000. It recognizes an outstanding BCMB undergraduate major who likewise intends to attend pharmacy school after graduation from UT. This award is intended for a rising senior who has declared a BCMB major and

who has an overall GPA of 3.6 or above and a score on the PCAT in the 80th percentile or higher. Past recipients of this award include Rachel Childers, Courtney Manlove, Anna Kegley, and Erin Sherwin.

Anna Kegley received the scholarship in 2014. She is from Clinton, a small town north of Knoxville. In high school she fell in love with chemistry. During her junior year of high school she worked at a small independent community pharmacy and finally put the two together; pharmacy revolves around chemistry! In 2014 Anna graduated from BCMB with a 3.84 GPA and was accepted into pharmacy school.

“My love for chemistry lead me to the profession of my dreams, pharmacy,” Kegley explains. “I am so excited about my future career and am ready to combat many of the pharmaceutical related problems society is facing, including antibiotic resistant bacteria, prescription drug abuse, patient medication compliance, and insurance reform.”

Kegley says she is thankful to be awarded the Tyler Duke Scholarship which was absolutely essential to her affording the cost of completing another year of undergraduate studies. “I think the upper division and general education courses I took that were not in the pharmacy prerequisite course work will prove useful in my professional career, “she said.

Kegley has just started the first year of pharmacy school at the UT Health Science Center in Memphis. Although she hasn’t yet decided what branch of pharmacy she wants to pursue—community, independent, or clinical—her goal is to end up in academia.