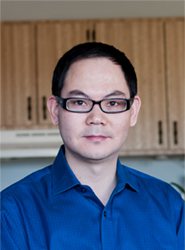 The overarching goal of the lab is to understand the mechanism and function of programmed DNA elimination, a unique form of DNA loss, chromosome end remodeling, and gene silencing. Genome integrity and its maintenance are essential to an organism. Although genome changes can enable variation, flexibility, and evolution, large-scale genome changes, such as chromosome breaks and DNA loss are often detrimental to organisms and lead to diseases, including cancer. However, there are exceptions in nature to this genome constancy rule. In a few organisms, including some parasitic nematodes (intestinal worms) and copepods (small crustaceans), regulated chromosome breaks and DNA loss is a physiological process during early development. This large-scale DNA loss is known as programmed DNA elimination. DNA elimination occurs only in somatic cells, not the germline, leading to a smaller somatic genome. Our previous studies demonstrated that in the nematode Ascaris, ~1,000 germline-expressed genes are lost during DNA elimination, suggesting that DNA elimination is a novel form of gene silencing in somatic cells. 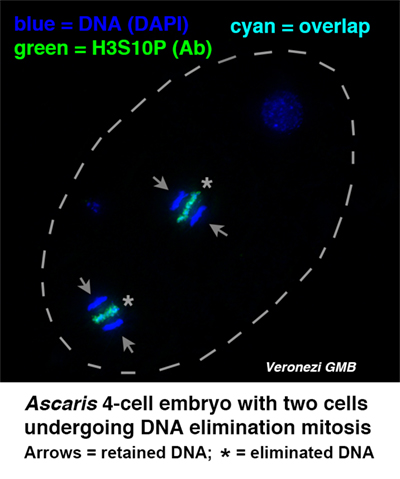 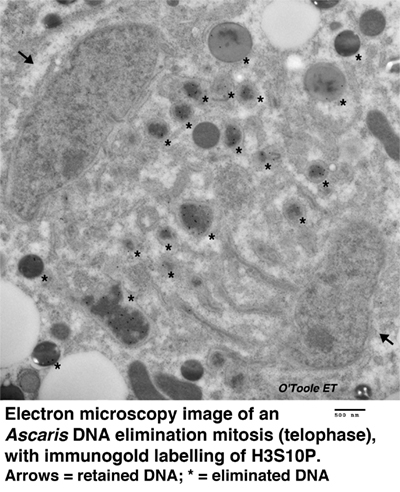 Our lab is using biochemistry, genomics and bioinformatics, cellular and molecular biology tools to study this fundamental biological process that occurs in a broad spectrum of invertebrates and vertebrates. Using the nematode Ascaris and copepod Mesocyclops edax as model systems, we are trying to address outstanding questions related to DNA elimination, including 1). How are the break sites recognized and defined? 2). How are the DNA double-stranded breaks made? 3). How are the DNA break ends processed and repaired? and 4). How is the eliminated DNA degraded? DNA break and repair mechanisms are essential to genome stability and maintenance. Understanding the physiological process of the DNA elimination may provide novel insights into DNA break and repair mechanisms that may facilitate a better understanding of DNA break and loss in diseases.

Wang J*, Garrey J*, Davis RE: Transcription in pronuclei and one- to four-cell embryos drives early development in a nematode. Current Biology 2014, 24:124-133. (* These authors contributed equally)