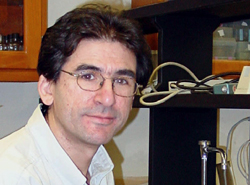 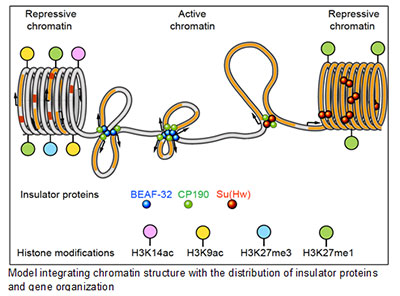 The long-term goal of my laboratory is to elucidate how chromatin organization mediates genome function in eukaryotic cells. In particular, we are interested in understanding the role of insulator proteins in the tridimensional organization of the genome in the nucleus and the significance of such organization in nuclear processes. Insulator proteins function by stabilizing contacts between distant sites along the chromatin fiber, facilitating the formation of chromatin loops. Because of this ability it is widely accepted that insulator function is required for orchestrating gene transcription throughout the genome during embryo development and during cell differentiation. Indeed, insulator function is highly conserved throughout eukaryotes, including yeasts, worms, insects and vertebrates as well as humans.

The physiological properties of insulator proteins, however, are only defined based on their ability to block enhancer-promoter interactions and to block heterochromatin spread in transgenic assays, and although a large body of chromatin immunoprecipitation data describing the distribution of insulator sites in eukaryotic genomes generally agrees with the interpretation that insulators help partitioning the genome into transcriptional domains, evidence supporting that the fundamental function of chromatin insulators is transcription regulation through the establishment of higher order chromatin structures is only indirect, and a direct mechanistic interpretation of insulator properties and function is still lacking.

One key evidence supporting the notion that insulators organize genomes into chromatin domains came first from the observation in Drosophila that insulator proteins form dense foci associated to chromatin. These foci are prominent macromolecular structures detected within the nucleus during interphase in the cell cycle, formed by the coalescence of multiple insulator proteins. Based on the insulator properties mentioned above it was suggested that these foci, also termed insulator bodies, were bound to chromatin and were the reflection of a global genome organization mediated by insulators as they arrange chromatin fibers into a three dimensional web of contacts between distant genome sites.

The significance of the insulator response to osmotic stress is emphasized by the fact that removing insulator proteins from chromatin may have vast effects in higher order chromatin organization in the nucleus, since insulators under stress conditions no longer support long-range chromatin interactions. This response does not impair the ability of the genome to regulate transcription given that hundreds of genes are activated by the p38 Mitogen-Activated Protein Kinase pathway during the stress response, emphasizing that the structural and physiological consequences of insulator-dependent restructuring of chromatin organization during osmotic stress are poorly understood.